This case study is written to include people who may be unfamiliar with the Twitter phenomena and those who have been using it for some time. The format that will be followed will be an introduction to twitter.com in the form of  a brief history of Twitter and brief description of how twitter is used. A poll was conducted, with 3001 respondents, to get some indication of what the general public perceives as success on twitter. These responses are then explored using information collected from external websites, research of twitter users experiencing some form of success and the personal experience of myself the writer of this case study.  The case study will conclude with a summary of the findings and reflections of my own experience in the quest for success on twitter.

History
Jack Dorsey was a software engineer who studied at New York University where he had a part time job designing dispatching software for taxi companies. He dropped out of university moved to California, home of tech startups. Once there Jack approached Odeo with the Twitter concept. He then worked with Biz Stone to build a prototype of Twitter. Biz Stone is a serial Silicon Valley Entrepreneur involved previously with Xanga and a serious blogger in his own right. Odeo was co-founded by Evan Williams the creator of Blogger.com which he sold to Google in 2003. In 2006 the three men turned all of their attention to Twitter which became a company in its own right . Currently Jack Dorsey is Chairman of the Board, Evan Williams is the CEO and Biz Stone is the Creative Director of Twitter. (Beaumont, 2009) (Fost, 2007)

Pictured below is one of the first hand written sketches in the planning stages of the website. 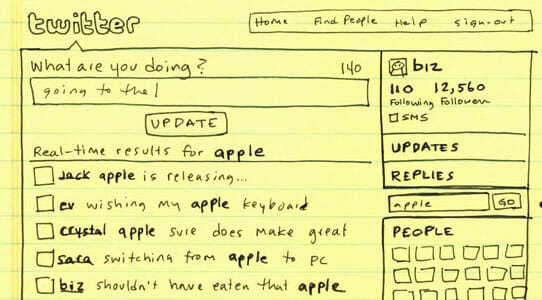 Mechanics – How to it works
The concept is that the user types into the box at the top what they are doing in 140 characters or less and then clicks on the update button. That message is then posted to the twitter database. To understand what happens next the follower concept must be explained. Followers feature later in this case study also so it is worth noting now.

A follower is a person who has chosen to read the messages that a particular user is submitting to twitter. Users can be followed by clicking on a follow button as seen in the image below. Each twitter account can follow as many other twitter accounts as they choose to, their account can also be followed by other users. This is how Twitter can be used to whatever capacity the user decides. The user can follow news feeds, writers of specific subjects, weather reports, traffic reports or everyday actions of the average person to the celebrity. All of the twitter posts made by people that a user is following appear in the timeline for that user in time and date order they are received by twitter.

The act of submitting the message is commonly called tweeting or to tweet and the message itself is called a tweet.  Hence tweet can be a noun or verb depending on the context.
A person using Twitter is known as a Twitterer. The people following  the messages posted by another are known as their tweeps (Twitter People) The whole of twitter has been refered to as the Twitterverse.

To address the argument of this case study the first half of the question will be covered first. Define “success on Twitter” 3001 people responded with an a answer.

A poll was the primary mechanism for this case study to establish what success means. The first approach was to poll the  twitter users following my tweets. This produced a number of responses not adequate to establish a true trend. The next and most successful option was an iphone application called iVote Pro was purchased for $1.19 and a poll was posted there asking the respondents for to choose from a selection what they considered success on twitter.

The demographic because of using the above medium is worldwide users of Apple iPhone or Apple iPod touch who have installed the free or paid version of the software. As stated earlier 3001 people responded to the poll over an 18 day period.

From these figures one interpretation would be that the majority of iphone twitter users believe that the number of followers is an indication of success on twitter. Darren Rowse (@ProBlogger) believes that is not the end of the journey for success at all. Here is an excerpt from his blog post on ‘Defining Twitter Goals‘.

This conversation went on for another few minutes – I won’t bore you with the details (we went in circles) but I think it illustrates an issue that I see many Twitter users having – they don’t know why they’re using the medium. (Rowse, 2008)

A small anaylisis of each category from the poll will now be discussed.

Celebrities form the majority of the top 10 tweeters purely by follower numbers. They are in an interesting category as prospective followers enjoy reading the daily routine followed by these people. For example when Demi Moore ( @mrskutcher ) ‘tweets’ she is watching American Idol, getting her hair cut at a private hair stylist, or reading a book on her Kindle her followers find that fascinating to have some insight into Demi’s daily goings on. Whereas if an unknown person tweets all day long about mundane daily life they will rarely build a large following.

On April 17 2009 Ashton Kutcher ( @aplusk ) became the first twitter user to reach 1 million followers. CNN ( @cnnbrk ) were trying to get there ahead of Kutcher but the media interest that Kutcher generated was enough to cross the line first. I observed the event via live video feed of Kucher and Moore’s home and recorded the occasions with screenshots as seen below. Click on the image below for the full size collage. It was a landmark event for statistics and the record books. It also attracted more attention to twitter and more users subscribed to help Ashton achieve the goal to be first to 1 million followers after which he donated $US 100, 000 to www.malarianomore.org . The positive and negative effects were discussed in depth on twitter and blog sites for a week after the event.

I have tried a variety of tweeters to get news updates, some send too many updates with every little news item which quickly becomes tedious and ruins the ‘design’ in my twitter patchwork quilt with one monotone colour..
@abcnewsSydney
@BreakingNews
@newsaustralia
@SkyNewsTopStory

These tweeters represent some of the main media news outlets for Australia and therefore the news is a summary of news already broadcast on other mediums. The real currency of twitter comes from the tweets submitted by eye witnesses at the scene of incidents as they happen. Often beating the mainstream media by a long period to report an event.

Examples would be the

Twitter has the ability to have virtually any person worldwide become the reporter at the scene give very immediate and major coverage of current events. Hot stories get passed around twitter extremely quickly and gain momentum in a short period of time. What are known as trends form when words are repeated in many different tweet messages. These trends can be seen using various software applications and websites. Here is a screen shot of the trends that occurred at the time of the Swine Flu out break in Mexico 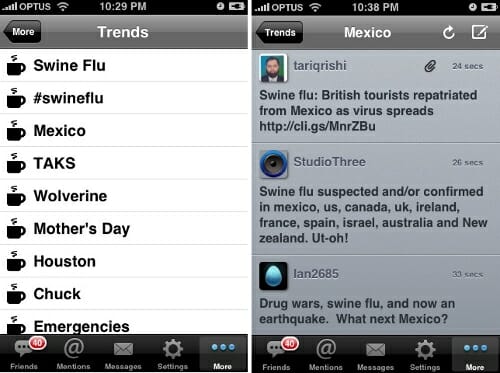 Twitterers tend to start conversations via a comment to a tweet made by someone else. It could be on a subject that they are interested already or something they want more information about. From my experience once a connection like that is made you tend to keep in contact from that point as the common ground makes the tweets made by both parties more relevant.

I have a regular “chat” via tweets with these tweeters:
@frombecca fantastic food writer who lives within 4kms of me so we compare notes on the produce markets and local restaurants. (ranks 16th for followers in Sydney)
@a_web_designer who has a web design business and is from Melbourne. We tend to chat on a wide range of subjects from how the week-end went to web design ideas.
@coledude , we talk mainly about cycling and exercise. Motivates me to report on my exercise activities as we have a mutual interest in riding about 10kms to work each day.

@hrheingold is the author of a large portion of the reading I have been doing for the subject I am currently studying. One night I was reading a section of his book in which Howard predicted in 1993 that

the president will have electronic town hall meetings

Within 30 mins of reading that information I was reading a post from President Obama’s twitter account about the first ‘electronic town hall meeting occuring. I excitedly tweeted the amazing parallel and was rewarded hours later by Howard Rheingold himself resending my message to his 8000+ followers with a thank you to me. That to me proved the ability to connect with people who would normally be unattainable but through the power of social media. The second website that has existed for around 5 years prior to my connection of twitter to it so its data is relevant. As seen in the image below the traffic to that website over the 3 month period has increased by 73.15 percent over the same period of time prior to joining twitter.

Other than the creators of twitter in my research I have not located one twitter user that has achieved any long lasting fame and whose name is still present in the general populations minds for more than the life of a news report. I do believe that over time some twitter users will develop enough of a following to expand their reach into the mainstream media.

As seen in the increased web traffic to the website I used in the case study. A monetised website with revenue for based on visitor traffic would definitely benefit from the impact of twitter. I have only recently added google adds to the website I used for this case study so there is no historical reference data at this point. The creators of Twitter are also yet to release a business plan to make money from Twitter themselves at this point.

I have really enjoyed using twitter and I intend to continue to be a twitter member for the longer term to continue to explore its possibilities. The growth of my follower numbers since commencing the case study have been as follows for each account.

This reflects that interaction and consistent posting provides many of the successful traits mentioned in the polling results and also increases follower numbers signifigantly at the same time.

Is it a virtual community

In respect to whether Twitter would be regarded as a virtual community there must be a way to qualify it as one. The conditions to delineate a virtual settlement are:

From my observation of the twitter and its subscribers I believe that it meets all of the above criteria and is a virtual settlement in it’s very early stages of growth with complex communication patterns between many different groups that also can share common areas of communication when global issues arise that affect the community as a whole. Membership is very transient but a core number is ever present and slowly growing in size.

Williams – Telegraph. Retrieved May 1, 2009,
from http://www.telegraph.co.uk/scienceandtechnology/technology/3520024/The-team-behind-Twitter-Jack-Dorsey-Biz-Stone-and-Evan-Williams.html.

broadcasts what users are doing via IM, Web, cell. Retrieved May 1, 2009, from

TwitterCounter – The Ultimate Twitter Statistics Provider! (n.d.). . Retrieved May 1, 2009, from 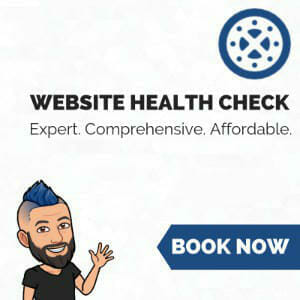 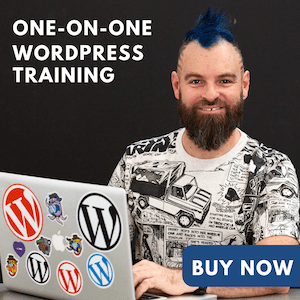 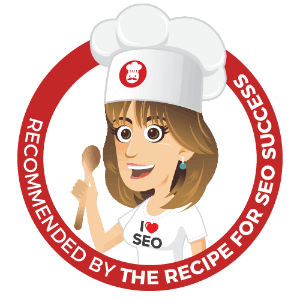